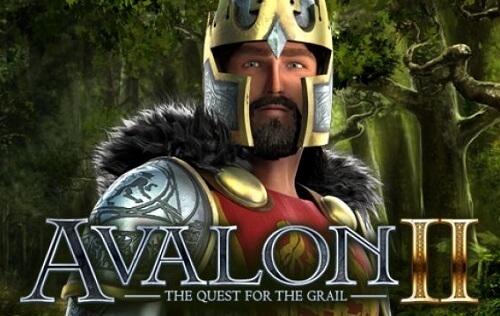 Avalon 2 by Microgaming is the sequel to the first Avalon video slots game, also by Microgaming. It takes players back into a medieval world, this time to find the Holy Grail. The game expands quite immensely on the first one, offering up to eight bonus games, high quality graphics, and well-made animations to create a superior playing experience.

The standard poker value playing card symbols have the lowest payouts, and players can receive anything from 0.04 to 0.80 coins by matching three, four, or five of the nine, ten, jack, and queen. The king and the ace pay out slightly more, ranging from 0.08 to 1.00 coins for landing between three and five symbols.

The character symbols pay out even more. The lowest paying character symbol is the Black Knight, which will pay out 0.10, 0.60, and 2.00 for landing three, four, or five symbols on an active pay line.

Players will get to experience up to eight different bonus features while playing Avalon 2. Each will take players on a different adventure, present them with a different game, and virtually guarantee them lucrative payouts.

The first of these is the Lake of Legend. In this bonus game, players will have to roll the dice in order to put together the shattered Excalibur sword. There will be prizes up for grabs while so doing.

The second bonus game is the Misty Vale. Here players will be able to choose their own wild symbol and play up to fifteen free spins.

The third bonus game is called the Dusky Moors game. Here players will have to match to helmets in order to win a prize.

In the Forest Falls bonus adventure game, players will be able to benefit from twenty free spins, together with trailing wilds.

In the Whispering Wilds bonus game, players will need to pick from five shields in order to reveal set multipliers or cash prize payouts.

In the Morgan’s Keep bonus game, players will be able to experience the rolling reels while enjoying up to twenty free spins.

The Hall of Shadows bonus game allows players to fight against the Black Knight. If they defeat him, they can find the Holy Grail.

Finally, in the Isle of Avalon bonus round, players are able to spin a wheel to uncover a bonus prize.